“An absorbing, highly entertaining novel about family secrets, The Never Never Sisters introduces you to the strong-willed and big-hearted Reinhardt women, as they reunite one summer in New York. Gifted storyteller L. Alison Heller has written another witty and moving page-turner that will captivate readers and keep them guessing right up until the satisfying end.

Sometimes you just need to get away….

Marriage counselor Paige Reinhardt is counting down the days to summer, eager to reconnect with her workaholic husband at their cozy rental cottage in the Hamptons. But soon a mysterious crisis at Dave’s work ruins their getaway plans. Paige is still figuring out how to handle the unexplained chill in her marriage when her troubled sister suddenly returns after a two-decade silence. Now, instead of enjoying the lazy summer days along the ocean, Paige is navigating the rocky waters of a forgotten bond with her sister in the sweltering city heat.

As she attempts to dig deeper into Dave’s work troubles and some long-held family secrets, Paige is shocked to discover how little she knows about the people closest to her. This summer, the self-proclaimed relationship expert will grapple with her biggest challenge yet: Is it worth risking your most precious relationships in order to find yourself?”

They say relationships with siblings is a bond that passes time and will always bring your back to the ones that know you best, however, sometimes those bonds can be severed or strained.  Personally, I am the oldest of four siblings, two brothers and a sister – my sister and I have never been particularly close – we have always managed to butt heads and never see eye-to-eye, even after living together for the bulk of our lives.  We’re both very strong minded women who have set ideas of how we want to live our lives and seemingly know how to go about getting what we want.  I have always told my husband that its taken two very special men to bring us both back to a level playing field especially when we’re strung-out stressed, overly emotional about something, or just in general are going off on some kind of tangent.  For my husband all he has to do is listen and let me talk myself down, for my sister all my brother-in-law needs to do is grab her, look at her and that brings her back down to earth.  He, like my husband seem to understand our inner workings better than we understand them ourselves.

It is for this semi-strained relationship with my sister that allowed me to somewhat understand where Paige was coming from – she so longed to build a relationship with her sister, Sloan, however, after her being gone for the better part of her life she was no more than a stranger to her – gee that sounds familiar – my sister is no better than a stranger to me who knows my history – it’s kind of strange if asked I’d tell someone that straight out!  So reading Paige’s story was like taking a walk down memory lane for me, with the exception that my sister never bailed ship on me, we just both grew in very different directions in our lives and never once came back together to develop a sisterly relationship.  For Paige her life takes an unexpected flip flop twice over – first her husband is suspended from his job and brings his workaholic life home with him and locks himself up in his home-office while Paige is left wondering what exactly happened – then bing-bang-boom her Mother drops the bomb that her stranger-sister is coming into town for an undetermined period of time, just dropping back into her life after a twenty some odd year absence.   The narrative takes the reader through the past, to the present, to the possible future to develop clearly what happened in the past that sent Sloane running, to figuring out the strained relationship Sloane has with her and Paige’s mother, to building a new relationship with her sister all the while trying to determine what exactly is going on with Paige’s husband, Dave.

Every family has its secrets, Paige’s is no different, only the secrets do not come out as clearly as a narrative normally would, and instead they surface through the inner-thoughts of her Mother.  This story hits home clearly for anyone who has any kind of relationship with their siblings, spouse, parents, you name it.  I found the story intriguing and clung to the pages of this novel with hopes that Paige, Sloane, Dave, and the whole family could come to some kind of resolve!

Four of our Five Stars for Never, Never Sisters because some of the narrative did leave me trying to follow the author’s stream of thought.

Obtain Your Copy of The Never Never Sisters from these Partners: 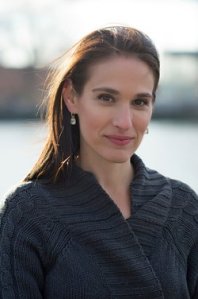 L. Alison Heller grew up in Connecticut and attended Bates College in Maine. After graduation, she wandered dreamily around the eastern seaboard, temping and interning and shelving books, trying a little of this and a little of that, before landing in Chapel Hill, North Carolina. Having hit her limit for dreamy wandering, she enrolled at the University of North Carolina School of Law. In 2000, she graduated from UNC with honors and moved to New York City, where she toiled in several law firms, growing increasingly nostalgic for those days of dreamy wandering. Alison opened her own family law and mediation practice in 2006 to help couples divorce with their sanity intact.

Alison’s first novel, THE LOVE WARS, will be published by Penguin (NAL) in May 2013. Her second novel, as of yet untitled, is scheduled for 2014.

Alison currently lives in Brooklyn with her family and is right now probably working on someone’s divorce or her next novel or riding on the New York City subway, dragging or being dragged by at least one child on a scooter. (Don’t be fooled by Alison’s modest blush–the subway dragging is every bit as glamorous as it sounds.)